I've got a new desktop background.

If I had the time to draw AL my friends, I would have.

Pictured, we got my close friends, Kashra, Tiberius, and Radjin Wolf, then of course Keto tossed in there... all feeling cartoony one afternoon. ;)

I've got a filipino relative who keeps saying, "Did you know that the Philippines has the number 1 culinary school in the world?"

So my first thought is, "Bullshit. If you had a top-ranked school, why would you put it in a country like the Philippines?"

So I think this is what my relative heard and misinterpreted it to be THE NUMBER ONE CULINARY SCHOOL IN THE WOOOORLD.

So someone correct me if I'm wrong (with a source)... but there's no way the Philippines has the number 1, or even a HIGH RANKED culinary school in the world.

It's not even just my bias, but why would a school planning to be great, choose a place of corrupted and poor country?

Okay, but for my bias part, who here who ISN'T filipino, actually thinks filipino food is great? I don't mean just one or two things, but as a cuisine, who thinks it's good?

I don't know why I go on this filipino rants sometimes.... I guess it just bugs me sometimes when I hear a Filipino relative SO EASILY cling on to a misinterpretation without thinking about it and just accepting it to be the truth, because he/she is filipino and roots for ANYTHING filipino-related.

PS. If you're a proud filipino, this is meant to be at no offense, it's just my opinion. Feel free to start friendly debate. :3 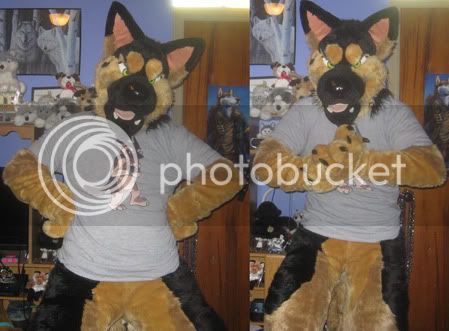 Teh sent me the FIRST PHOTO showing off the shirt I just put up for sale. Mr. G-Shep Desoto shows it off: http://www.furaffinity.net/view/3851286

If you've recently bought a shirt from me, please let me redirect you to my previous journal: http://www.furaffinity.net/journal/1386902/
You can get free stuff!

Yes, it IS safe for work.

Birthday picture for a close friend of mine. :) Even if he can be a dick sometimes, I still pretend to like him! ;)

My sister's birthday is today... she also found out it was Charm's birthday yesterday, and she got all excited and was like, "*gasp*... her birthday is right before MY birthday?"

And so she wanted to draw a picture for Charm.

My sister describes the picture:
Now. The theme here is pow-wow. I got this idea from my brother's painting. If you see here, the pow-wow is about the king of pow-wow parties is Charm.

"We have chosen you to be the pow-wow king again. Hope you have a good day. Hope your whole family is fine and you have a wonderful birthday."

If you can't tell, Charm is the one with the crown, second from the left on the inside of the card.

I made chocolate covered strawberries for my sister's party. I wish I got a better photo of it, presented on a nice dish or something... oh well.

Not exactly friendly for work, but safe enough for work that it's on youtube.


I love when big guys from movies make it aware to everyone else that THEY'RE aware how attractive they are in the whole bear community thing. Nick definitely knows, from this clip! <3

Now before you say anything....

I've been working on my website for school... and I thought it'd be cool to use this jquery plugin to display your most recent twitter on your website... And I wanted to use it... but I realized I had no twitter.

So when friends and I went to go watch How To Train Your Dragon, I first saw the preview for this "Legend of the Guardians".

And I remember watching it, and my first thought was, "Really? a movie about owls?....wtf"

Then I thought, "Omfg, it's "Kings and Queens" by 30 Seconds to Mars playing in the background. I LOVE This song, and it surprisingly fits this pretty dramatic trailer...."

Then as the trailer finished, I thought, "Wow... I'm actually excited to go see that movie. It looks very heartfelt."

Then I google the trailer, and find out the Zack Snyder is the director for it. Wtf? So now I'm MORE interested in seeing this movie!

In case you don't recognize the name, Zack Snyder is the guy who directed the Dawn of the Dead remake (which was awesome), 300 (awesome again), and Watchmen (Ehhhh, I didn't care for it). So now only do I generally see him as a good director, but this animated movie seems like a very different thing for him... I mean it's a family friendly movie for one. But it's weird how the trailer wouldn't even MENTION a director who's done such big movies in the recent past.... weird.

So yes, I DO plan to see this movie now.

Tidbit: I was watching it, and if you know the song, you'll notice that the last lyric they play in the trailer for this is, "Between Heave and Hell".... and at the 1:50 timestamp of the trailer, he's SUPPOSE to yell, "Hell".... but they censor the "H" sound.... subtle, but I thought it was amusing. :) 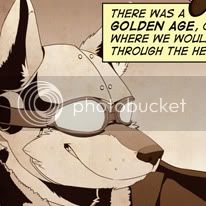 I had advertised before how the preview comic, issue #0, would be published and sold... but things fell through, this and that happened, and.... in the end, things didn't work out exactly as planned, and guess what?

The comic will be posted ONLINE, starting TONIGHT. Kashra and I will be posting the pages, 2 at a time. (16 pages total)

Thank you all for your patience and support. I swear, it's VERY much appreciated. You guys are the best!

Issue #0 is about a year old, and was Kashra and I's first comic endeavor, but we DID work our butts off to complete it as best we could with the restraints we had at the time. The next issue, which we can call issue #1, will be bigger and better-- with no deadline or pressure this time, and the support of you guys and our friends.... we promise to work hard and put something out that is only better.

Thank you all for your support! You're all wonderful!

And I know Russell Crowe is a bit on the aged side, but I can't be the only one who thinks he makes a damn hot Robin Hood..... I don't usually find him hot... I mean he's attractive, but in Robin Hood, Russell looks like a freakin MAN... and that's hot.

The movie itself looks good too. :3
Collapse